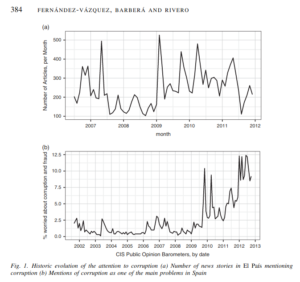 Corruption scandals have been found to have significant but mild electoral effects in the comparative literature (Golden, 2006). However, most studies have assumed that voters punish all kinds of illegal practices. This article challenges this assumption by distinguishing between two types of corruption, according to the type of welfare consequences they have for the constituency. This hypothesis is tested using data from the 2011 Spanish local elections. We exploit the abundance of corruption allegations associated with the Spanish housing boom, which generated income gains for a wide segment of the electorate in the short-term. We find that voters ignore corruption when there are side benefits to it, and that punishment is only administered in those cases in which they do not receive compensation.