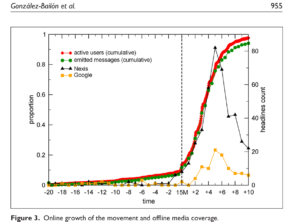 This article explores the growth of online mobilizations using data from the indignados (outraged) movement in Spain, which emerged under the influence of the revolution in Egypt and as a precursor to the global Occupy mobilizations. The data track Twitter activity around the protests that took place in May 2011, which led to the formation of camp sites in dozens of cities all over the country and massive daily demonstrations during the week prior to the elections of May 22. We reconstruct the network of tens of thousands of users and monitor their message activity for a month (April 25, 2011, to May 25, 2011). Using both the structure of the network and levels of activity in message exchange, we identify four types of users and analyze their role in the growth of the protest. Drawing from theories of online activism and research on information diffusion in networks, this article centers on the following two questions: How does protest information spread in online networks? And how do different actors contribute to the growth of activity? The article aims to inform the theoretical debate on whether digital technologies are changing the logic of collective action and to provide evidence of how new media facilitates the emergence of massive offline mobilizations.