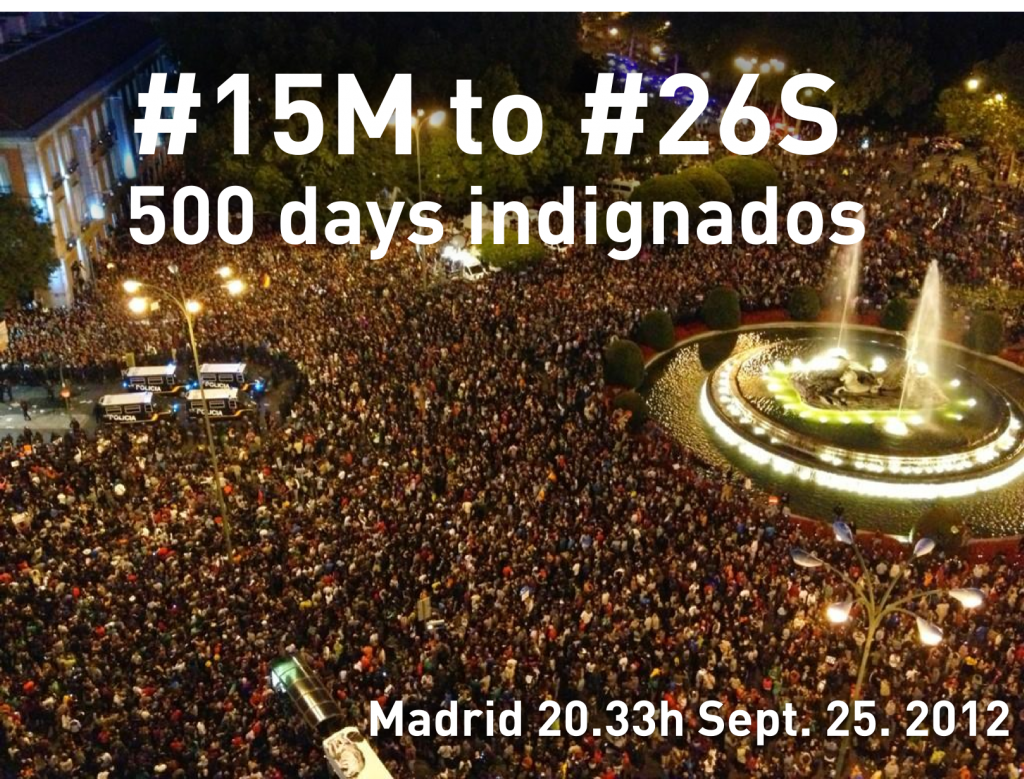 Yesterday was #25S. It was a special demonstration day. Initially called “take the congress” and then changed motto “surround the congress” it raised fear in the polititians, police and many main stream media. 1.400 policemen were blocking the parliament to prevent its occupation. The change of government in November’11 has only made the austerity measures stronger and the social discontent bigger. The accumulation of days of discontent and protests is too large to be remembered (15M, 19J, 15O, 12M15M, 15S, 25S), but one more time there was a change in the tactics or at least  in the expectations. If in the anniversary of the #15M movement there was a question in the air “And now what?” now people are asking directly congress men to go away and change the constitution, following the Iceland revolution model.

#25S has been special for the fear that has inspired, that could be felt in the registration of buses that were going to the demonstration; the eviction of a squatter social center that supported the coordination of the #25S; the accusations of coup d’etat by members of the government; or the high number of policemen surrounding the congress. It was being broadcasted by the public television (rtve.es) until the it was shut down, apparently after a call from Moncloa. Today, the public channel is not broadcasting it, and it’s been replaced by El País and other streamings. There is non, that I have seen, a permanent webcam such as beloved soltv.

We were following through Twitter and live streaming what was going on in Madrid, showing support and giving information for people on the ground. And later, once things got calmed in Madrid, time to watch videos that people were uploading and digest the violence of the police. The 6 hours of difference help in that!

To sum up, and because this is what I wanted to post about, yesterday was a good meme generator:


First moments of violence were provoked by a group of people with black and red flags. In the last 24h there have been a large number of videos and reports showing that these people were under-covered policemen. The video above shows how one police on the floor tells his colleagues “I am your colleague  fuck!”

Hunting in the train station

Minute 6:01.
Policemen chase the protester inside the main train station from Madrid, and they fire their rubber bullets.

The waiter = The protector 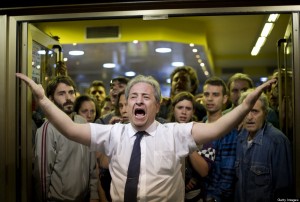 A  celebrity of yesterday night: the waiter that prevented policemen from entering his bar and attack the demonstrators.

and the secretary-general of main Spanish police union (SUP) justifying policemen without identification and supporting violence:

To find out what is going on, always the usefull Topsy analytics.

Update: I forgot to add the action of support by the iron-blogger community from Boston last night! 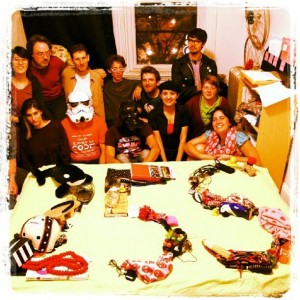